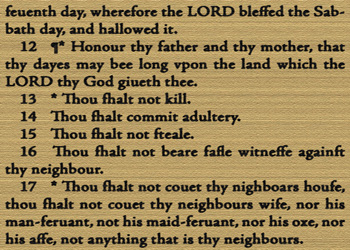 In 1631 printers introduced a single bit error into an edition of the King James Bible. They omitted an important “not” from Exodus 20:14, making the seventh commandment read “Thou shalt commit adultery.”

These unfortunate professionals were fined £300 (roughly a lifetime’s wages). Most of the copies of this “Wicked Bible” were recalled immediately, with only 11 copies known to exist today (source Wikipedia, image Urban Dictionary).

One of the problems with silent data corruption is that we may not even notice that is it there when we read the data back. Indeed, we may actually prefer the adulterated version. Happily the 1631 error stands out against the rest of the text in which it is found.

ZFS protects all its data (including metadata) with non-local checksums. This means that it is impossible for silent data corruption introduced anywhere between the dirty spinning stuff and your system memory to go unnoticed (what happens from there onwards is entirely up to you).

ZFS is able to repair corrupted data automatically provided you have configured mirrored or RAIDZ storage pools. It’s just a shame the British authorities didn’t take the ditto blocks in Deuteronomy 5:18 into account way back in 1631.