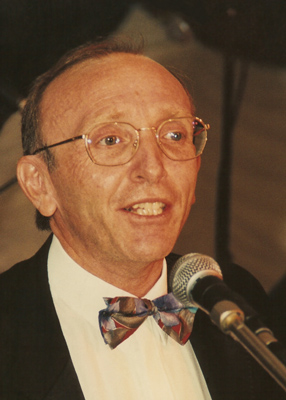 I started at Sun at the end of February, 1989. I think Roy joined within a month of me. When I made the jump from Customer Services to Sales Support, he was my first manager. I owe him a lot in terms of my personal development. He was always something of an older brother figure and mentor to me. Roy always showed a genuine interest in individuals and their families. He did all he could to make working for Sun more family-friendly. He set a good example of working hard whilst having fun, and without forgetting that there was much more to life than work.

The only criticism I ever heard of Roy was that we was very tight with money. Sometimes he seemed to give the impression that our business expenses, equipment budget and so on came directly out of his personal savings. But he always applied the same control to his own spending — only more so. Even when he was home bound it was hard to get Roy to spend even modest amounts on the equipment he really needed to do his job. I guess the chipboard coffin is standard Jewish practice, but I’m sure Roy would have heartily approved!

But what sticks with me most if Roy’s patience and endurance through so much suffering. He had so many secondary issues to deal with due to his early cancer treatment (I guess they went over the top on that because they didn’t think he had long to live).

I think it is worth telling the story of Roy being given 6 months to live — 10 years ago. I think we need to record his 50th birthday. The story of Roy tripping on a marquee guy rope and the walking around with a broken neck for at least 6 months is remarkable. If I recall correctly, he was in a lot of pain, but they put it down to his cancer. Roy proudly showed me his x-rays (first the beautiful intricate work of the neurosurgeons supporting his broken next, and then the functional rods inserted by the orthopedic chaps). Later he showed me the x-ray of the electrodes wired into his spine for pain relief (something like a cross between a TENS machine and a pacemaker).

He endured so many operations, so much pain, and so many setbacks. But he also made huge progress and frequently amazed us with with determination to bounce back and continue with his work. I will always remember seeing Roy in “The Directors” line-up at the 2004 kick-off meeting in Nottingham.

The last year was hard to watch. It doesn’t seem long after Nottingham that the sudden paralysis came. It was hard to see Roy brought so low. But he wouldn’t give up fighting, even then. Sometimes we felt he needed to stop work, but it had to be his choice. And as we watched, it seemed clear that Roy knew he would decline very rapidly if he had nothing to do, nothing to aim for any more. Very rarely did we hear any complaint.

It was my privilege to be welcomed in to the Chadowitz home on many occasions. Carol always kept me well fed, and Simon was often good company during the long waiting periods which come with certain system admin chores. I remember the excitement around Lee’s Bar Mitzvah, and Roy’s pride in explaining it all so me. What an amazing family! So much practical love. There were dark moments — times when it was clear that Roy was troubled about the burden he had become, but no-one would hear such talk! The love that Roy and Carol shared was an inspiration to see.

I last emailed Roy the day after his 50th birthday (although I didn’t know that at the time). two days before he finally left us. That was the first time I didn’t get a reply. When Greg phoned on the Saturday evening it was the call I had been dreading for years — 10 years. I’d expected it, but somehow Roy’s determination to keep going had lulled me into a false sense of security. It was like hitting a wall.

I had got used to seeing Roy confined to his bed. Even then I’d seen him struggle — and improve! But I’d been away for too many weeks (business trips and heavy colds kept me away). I didn’t see Roy at his lowest. I didn’t see him when he was unable to speak. That would have been intolerable for him. He always had so much to say. So much to give.

His most common parting shot to me was “Keep smiling, Phil”. It’s hard to do that just now, Roy, but I’ll try!

Note: I have closed comments on this entry due to comment SPAM.
Please email me directly if you want to add something further.