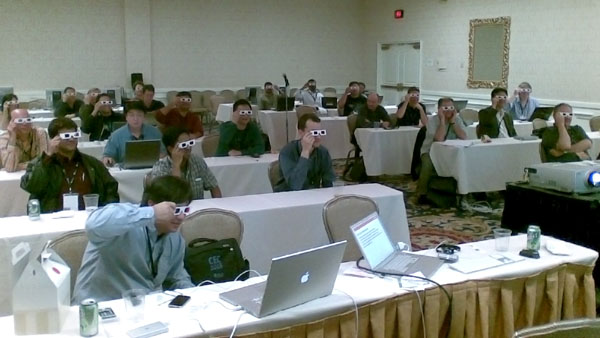 This afternoon at CEC 2008, Jon Haslam took our experience of DTrace to a new frontier by stimulating our visual cortexes with some jaw dropping 3D visualisations. As we flew between the nodes of Solaris call graphs graph to the strains of Star Trek theme tunes, those heady early days of truss(1) seemed positively prehistoric. 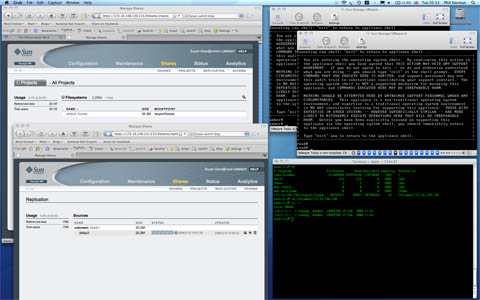 I was there when they launched the Sun Storage 7000 Unified Storage Systems (“there” being the CEC conference in Las Vegas). Within an hour of the launch I had downloaded the Sun Unified Storage Simulator for VMware Fusion and started playing with this ultra-cool software stack on my MacBook Pro.

Later in the evening, Bryan Cantril and Mike Shapiro, the geniuses behind these amazing new products, issued a challenge for someone to be the first to set up a pair of laptops with a fully replicated virtualised service.

Not being one to pass up such challenges lightly, I nonetheless thought I would take it stage further with an attempt at setting up replicated servers on just one laptop (because that’s all I had with me).

I had hoped to write a long and detailed tale of how I laboured hard and long (against the all odds, etc) to bring this amazing feat to pass, but in the event it was just all too easy. In fact it is taking longer to write this blog than it took to do the work!

I used Fusion’s host-only networking to set up a private 10.0.0.0/24 network between the two virtual machines. Everything I tried “just worked” and was so intuitive, that there was no need to read any documentation.

Having demonstrated my solution to Mike, I took a series of three screen shots of my Mac desktop to illustrate the replication in progress for this blog. Each includes VMware Fusion consoles for both servers, the web management interface of each, and a local Terminal window showing the Mac being an NFS client of the primary server.

The first screen shot shows the replica in sync with the primary server, with each seeing 20.2MB in the default share.

The final shot, taken less than a minute later, shows 30.2MB on both servers, the replication of the new 10MB file having just completed.

How cool is that?!